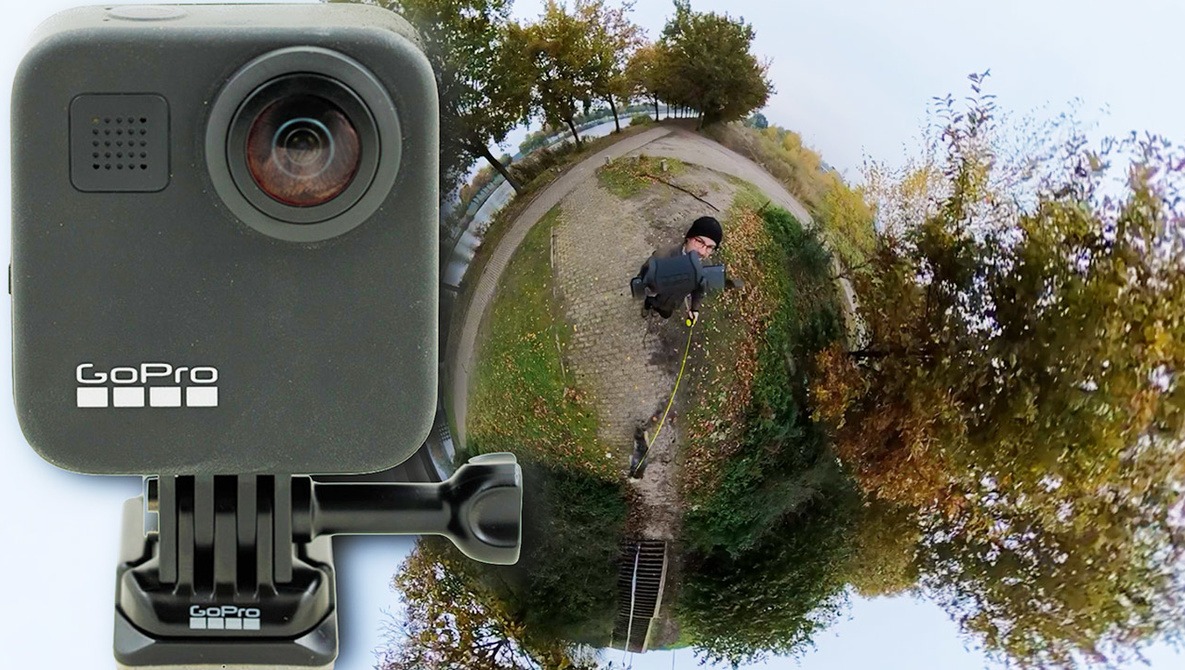 When I needed a 360-degree camera for my real estate photography, I was looking for the Ricoh Theta Z1. I got the new GoPro MAX 360 instead, because the Ricoh was not available at that time. Now, I want to share my thoughts on this 360-degree action camera.

In the Netherlands, there is a growing demand in interactive 360-degree photography in real estate. For that, I have a really nice Really Right Stuff panoramic setup that works quite well. I can shoot two series of six images with my Loawa 12mm lens, together with a nadir and zenith image to cover 360/180 degrees. But often, there is a need for HDR, which requires me to use as least three different exposures per image and sometimes even five exposures per image, depending on the situation.

When shooting HDR, I end up with at least 42 images that have to be stitched together. Imagine you have to produce five panoramas, or more. That is a lot of images and a lot of work, although it is possible to automate a part of it. A 360-degree camera should be able to shoot a perfect panorama with one click of a button, which saves a lot of time.

While waiting for the delivery of the Ricoh Theta Z1, I was handed a GoPro MAX 360 camera to see if it was a good alternative. The GoPro is famous as an action camera. It is used by motor cyclists and mountain bikers. It is used as a body camera, or to capture extreme sports, but also by hikers who wander over mountains. Well, I guess this is something everyone knows. The HERO 8 is the most advanced model by GoPro, producing 4K films, but it does not allow 360-degree footage. For that, there is the GoPro MAX 360.

The MAX is replacing the GoPro Fusion, that was introduced back in 2017. It has the typical GoPro looks, which can easily be recognized from a distance. The two fisheye lenses on both sides of the body capture the complete surroundings. A small touchscreen on the backside makes it possible to operate the camera.

Just like its siblings, the MAX is small and lightweight, which makes it easy to attach it to almost everything. It has its typical GoPro mount, allowing all sorts of accessories. It comes with a small, curved adhesive mount. I guess you will need to buy a few extra mounting accessories to use the MAX in more setups. Unfortunately, the camera body does not have a standard tripod mount incorporated.

Behind a hinged door, the battery, memory card slot, and a USB-C connection port can be found. It requires you to open the door when you charge the MAX or when you want to download your images from the camera.

The GoPro MAX is very easy to use. It only has two buttons that operate the basic functions and a touchscreen for all other settings and for reviewing the footage you recorded. Unfortunately, you can only view the recording of the forward-facing camera, and not the 360-degree camera. For that, you will need to use the GoPro app on your smartphone or tablet.

The 360-degree film is recorded and stitched on the fly in 5.6K resolution at 30 frames per second. It does its job very well, with great image stabilization built in. Even while running, with the camera connected to a four-foot long monopod, the MAX produces very stable footage. It really impressed me.

Besides 360-degree film, the MAX also allows you to shoot 360-degree photos and time-lapse (time warp) footage. It is also possible to use the MAX in HERO mode by turning off the back side camera and transforming the MAX into a normal action camera. Unfortunately, it is limited to 2K resolution and 60 frames per second. If you would use the camera mainly in HERO mode, I think the GoPro HERO 8 will be a better choice, allowing you to shoot in 4K resolution and up to 240 frames per second.

With use of the GoPro app, the MAX can be operated from a distance. This is perfect for shooting photos, allowing you to leave the vicinity before the photo is shot. The app allows you to preview the image, swiping and scrolling to check every inch of the photo. Also, filming can be done from the app, with the possibility to look around. But the real fun starts when using the app for editing your film footage.

In the editor, you can change the point of view very easily and transform the film into something quite unique. Since the resolution of the film is quite high, it takes a lot of resources to edit. An iPad Mini 4 had some difficulties while editing, and it took about one hour of rendering for a six-minute film. Working on the iPhone XR was a lot quicker.

Taking Photos With the GoPro MAX

Shooting video in low light is not bad at all. Also, high-contrast situations work well. This changes when the MAX is used to shoot photos. I noticed a significant decrease in dynamic range that is also clearly visible in the app.

Because the MAX shoots only JPEG images, it will be very difficult to post-process the images. Lifting up the shadows will result in a unacceptable increase in noise and artifacts.

Although shooting 360-degree photos is very easy, the camera does not allow a lot of flexibility. There is a limited amount of settings available, allowing only a few stops of exposure correction. There are no HDR modes and no raw file format. This results in JPEG images that do not look very pleasing in situations that require a large dynamic range. During daylight, the quality is acceptable, though, and for the casual photo, it will be okay, I guess.

The next two images are interactive 360-degree images, unedited, with a few nasty highlights. Click on them to explore.

My main goal was shooting indoor real estate. I used the MAX a couple of times, but it did not produce acceptable results. I also used the exposure compensation to acquire three different exposures, which I merged manually into an HDR-like image. Unfortunately, the result was not acceptable.

At first, I was very disappointed in the results I got from this small 360-degree action camera. But that is because I was focused on only one aspect: photography. It is clearly not intended to be used as a 360-degree photo camera.

I have to judge the MAX for what it’s intended for: it is a 360-degree video camera and not a normal action camera or a photo camera. Sure, it has built-in a HERO mode. and it can be used as a camera. But it is made for filming in 360 degrees. And it does a very good job.

When seen from that point of view, I have to admit the MAX is a good, robust, and capable 360-degree video camera. Together with the GoPro app, you can produce wonderful films with a mind-boggling point of view if wanted. The image stabilization works very well, producing very stable footage.

If you choose the GoPro MAX, it has to be for 360-degree filming. Don’t buy this camera for its HERO mode or for photo capabilities. It is available if needed, but it does not give you the best results.

I can conclude it is a very good 360-degree camera that makes it possible to make wonderful films in a very easy and user-friendly way.

Although I used the GoPro initially for photography, I found out it is a really good 360-degree video camera. Nevertheless I think it is a missed opportunity, though, given the cut-down specs for the HERO mode and photography. If interested, you can pick up yours here.