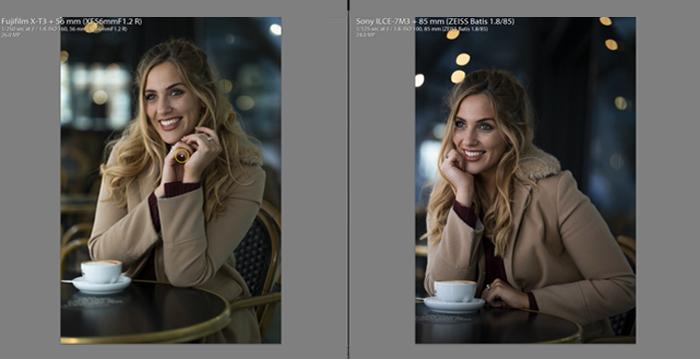 For many photographers, a good 85mm lens camera is simply indispensable. For full frame cameras, there are plenty of options; however, for those that shoot with an APS-C camera, options are somewhat limited. Fujifilm is one of the companies that offers something brilliant in this range, and I wanted to test and compare it to a full frame “equivalent.”

In our latest video, Anete and I compared the Fujifilm 56mm Vs Zeiss Batis 85mm. We picked the a7 III because of its brilliant autofocus system and the fact that it has a very similar resolution compared to the Fujifilm X-T3, which was also part of the comparison. The most immediate thing we noticed between both systems was the fact that the Sony camera felt much faster and seemed to be far more responsive when it came to autofocus. It seemed to find the subject far more quickly than the Fuji, which did seem to get a little confused at times, especially with its eye-detection features. The other thing I noticed was that the results in terms of the look between both lenses were very similar, and in a real-world shooting scenario, the differences were not significant. Considering the price difference between the two, it’s incredible how well the Fuji system compares to the Sony. Of course, there are some notable differences between both in terms of performance, which could be important for some photographers.