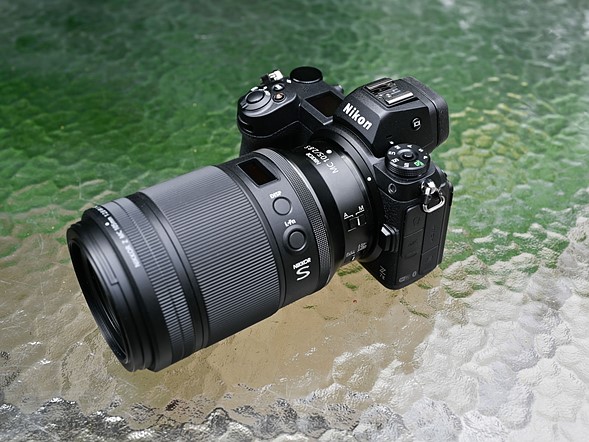 Nikon recently announced its first native macro lenses for its Z mount cameras: the Nikkor Z MC 105mm F2.8 VR S and the Z MC 50mm F2.8. Going forward, ‘MC’ is going to be Nikon’s designation for lenses that are macro-capable. Nikon is, as expected, touting both primes as excellent for close-ups at 1:1 magnification, but the 105mm is sure to find a home in many a portrait shooter’s bag and the 50mm could make for an excellent walk-about lens – in other words, they’re not just for macro shooters.

We’ll be working on a sample gallery from the 105mm F2.8 in the coming days, but in the meantime, let’s take a tour of these two new primes and what they’re made of.

Let’s start with the MC 105mm. Nikon has designated this as an ‘S-line’ lens, meaning that it’s built to a high optical and physical standard (higher, we’re told, than the company’s ‘gold-ring’ F-mount DSLR lenses).

Starting with the exterior, we can see that the 105mm F2.8 has a top-level display that we’ve seen on other high-end Z-mount lenses. In this case, it can display focus distance, chosen aperture or, new for this lens, the reproduction ratio it’s currently at. These options are all selected using the ‘Disp’ button shown next to the display. There’s also a ‘L-Fn’ button, for ‘lens function,’ the behavior of which you can customize in the camera’s menus.

Immediately in front of the display of the display panel is a thin, textured control ring, the function of which can also be customized in the camera’s menus, and further down the barrel is a very wide manual focus ring. Nikon says the manual focus ‘feel’ has been improved, and users can fine-tune how sensitive it is to their inputs.

Not visible though is the extensive sealing throughout this lens, including a gasket at the rear mount to prevent dust and moisture incursion. Nikon also includes a locking lens hood. Around the front of the lens is a 62mm filter thread and the front element comes with a fluorine coating to keep dust and fingerprints to a minimum.

Nikon tells us that the MC 105mm F2.8 S VR is not meant to merely replace an adapted AF-S 105mm F2.8 VR from the company’s F-mount lineup for DSLR cameras, but to improve upon it.

The new lens comes with 16 elements in 11 groups, including 1 aspherical element, and 3 ED (extra-low dispersion) elements to suppress chromatic aberrations. Special ARNEO coatings, in addition to the more traditional Nano Crystal coatings, are added to specifically reduce flare from incident light sources reaching the lens from a vertical direction. Think bright light sources within the frame above or below the horizon.

By contrast, the older AF-S 105mm lens has 14 elements in 12 groups, with only 1 ED element and 1 element with Nano Crystal coating. In particular, the rear element of the Z MC 105mm F2.8 is a large-diameter aspherical element. If designed and implemented correctly, such elements held close to the sensor plane can effectively correct certain aberrations at peripheral portions of images better than DSLR designs.

The Z MC 105mm’s complex optical formula is meant to suppress onion ring bokeh, flare and ghosting, and increase contrast and detail. We’ll have a closer look at whether these claims ring true when we get our sample gallery going, but for now, you can check out Nikon’s own sample images for a first peek.

In-lens stabilization on the 105mm F2.8 is capable of around 4.5 stops of of shake reduction, which will be especially helpful if you’re shooting on the Nikon Z50 APS-C camera that doesn’t have an in-body stabilizer. If you’re shooting on a full-frame Nikon camera with an in-body stabilizer, you still get 4.5 stops of stabilization, but you get 5-axis correction instead of 3-axis with the lens only.

Nikon’s Nikkor Z MC 50mm F2.8 is a much more diminutive close-focusing option, seen here on a Nikon Z5 full-frame camera. It’s meant as a sort of native counterpart to Nikon’s AF-S 60mm for its F-Mount DSLRs, but the 50mm focal length makes it a bit more versatile for everyday shooting as a walkaround lens. (Although it is a departure from the 60mm Macro lens that Nikon originally listed on its Z lens roadmap.)

As you can see, the 50mm F2.8 has an external focusing system, with markings present on the lens barrel to help you orient yourself while shooting close-up. Despite this design, Nikon says the lens remains dust and drip resistant.

Expectedly, controls on the exterior of the 50mm F2.8 are a bit more limited compared to the 105mm, but there’s still a nicely sized, dampened manual focus ring, an ‘Auto / Manual’ focus switch and a focus limiter. The limiter allows for use of the full focus range, or limits it to 0.16m (the minimum focus distance) to 0.3m for macro work.

Tucked inside Nikon’s MC 50mm F2.8 are 12 elements in 9 groups (compared to 10 elements in 7 groups on the AF-S 60mm F2.8). Nikon says that this new lens doesn’t have Nano Crystal coating like the F-mount model, but Nikon says other advances in optical design mean you should still see better flare suppression than the older lens.

There is no in-lens stabilization on the MC 50mm F2.8, so you may need faster shutter speeds to get sharp images on Nikon’s Z50 APS-C camera. Lastly, the 50mm F2.8 is compatible with Nikon’s ES-2 film digitizing adapter, to aid in converting 35mm film to digital.

And that wraps up our tour of Nikon’s latest macro lenses for its Z-mount cameras. Are these the lenses you’ve been wanting for your photography? Let us know what you make of them in the comments below.