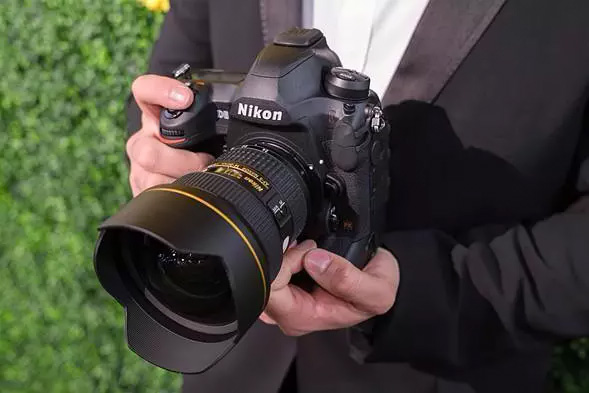 The Nikon D6 is the company’s latest full-frame, high-speed sports DSLR, and we’ve just had the chance to get a look at one in-person at the 2020 Wedding and Portrait Photography Expo in Las Vegas. While the camera was operational, we weren’t allowed to capture any images with it – only images of it, for now anyway. Let’s take a closer look.

Behind that lens, and grip and front function buttons

No surprises here, Nikon’s not going to mess with a good thing – as someone who’s used the D5 extensively, I can confirm that the D6’s grip feels very familiar indeed, and is very comfortable. Those front function buttons are all very well-placed for easy access.

While we weren’t able to take the lens off this pre-production unit, the D6 comes with the same 20.8MP resolution of the D5, but a new Expeed 6 processor boosts burst shooting and should help with high-ISO performance, especially shooting JPEG.

Top-plate controls are all-but identical to the D5’s as well, though we can see there’s now a polycarbonate cover around the hotshoe that likely houses the camera’s wireless antennas. On the top left shoulder, the ‘Mode – BKT – Metering’ controller is a bit more raised-up than we saw on the D5, and that’s really about it up here.

The rear of the camera is likewise going to be familiar to previous Dx-series users. Like, really familiar. Looking at the D6 and D5 side-by-side, the only difference I can find is the painting of a microphone symbol by the Fn3 button on the lower left corner. This means that this is likely the default button for recording audio notes to accompany images.

The side ports also look familiar, but there has been one change: the headphone jack and HDMI ports of traded positions, but that’s not likely to trip anyone up. Change just for the sake of change isn’t always the wisest choice on this type of camera. Many users will be picking one up and immediately setting it up exactly like their older D5’s and D4S’s and going out shooting. These types of professionals rarely want to reprogram their muscle memory.

The Nikon D6 is the first camera in the series to eschew the use of CompactFlash cards entirely. Whereas the D5 could be configured with either dual CF or XQD cards, the D6 only accepts dual CFExpress cards. We think this is a good thing; these cards are durable and incredibly speedy.

We’ve been reliably informed that production sample cameras will ship without gaffer’s tape (applied to prevent show-attendees from sneaking in a card for unauthorized test shots).

This is where Nikon’s concentrated most of its efforts. The autofocus system in the optical viewfinder is all-new, with 105 points, all of which are cross-type and use what’s called a ‘triple-sensor arrangement.’ The coverage area is very similar to that of the D5, though Nikon claims that the area of coverage is ‘1.6x denser’ than that of the D5. The whole array is sensitive down to -4EV, with the center sensor sensitive to -4.5EV.

In our brief hands-on with the D6 and the new AF-S 120-300mm F2.8 lens (which we’ll be featuring in a separate slideshow), the camera focused impressively fast from both near-to-far focus, and based on ‘Demo’ image review on the rear display, incredibly accurately. The D5 has been a benchmark for absolute autofocus performance for some time, and if Nikon’s made the D6 even better, that’s an impressive achievement. When we get a full review unit, expect lots of real-world sports AF testing.

The Nikon D6 comes with built-in wireless connectivity, which is likely to be well-received by end users (no more being forced into attaching an expensive external accessory). Hiding down at the bottom of the screen, you can also see the camera is set to its new maximum burst speed of 14 fps with autofocus and auto exposure. Firing off a handful of bursts, blackout is very well-controlled, and 14 fps is still going to be plenty fast for many types of action.

The rear screen is touch-sensitive, as with the D5, but there’s a new ‘swipe’ functionality in playback that brings up connectivity options right there to streamline the process of sending images off after they’ve been taken.