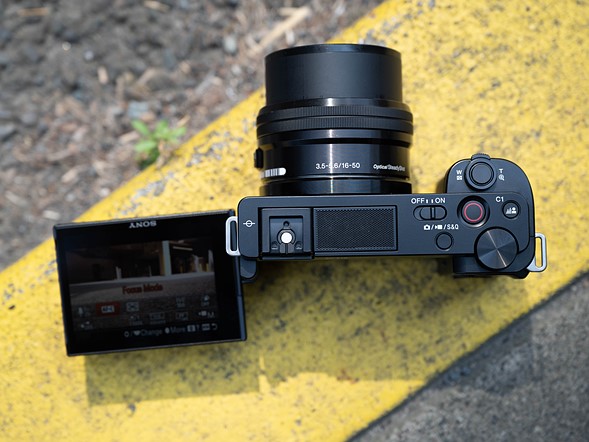 The Sony ZV-E10 is an APS-C, E-mount interchangeable lens camera designed primarily for vlogging. It’s largely based on the company’s entry-level a6100, with a three-capsule microphone and fully articulating LCD display (and no electronic viewfinder) being the main cosmetic differences compared to the older model. It offers the same excellent autofocus system, image quality and performance as the a6100.

It inherits most of the software features from the ZV-1 compact vlogging camera, including the background blur and Product Showcase features, livestreaming capability and soft skin mode.

While the ZV-E10 has most of the innards of the a6100, there have been quite a few design changes to turn it into a vlogging camera. The top plate has been totally retooled (more on that on another slide), the EVF and pop-up flash have been removed, and replaced with a multi-capsule directional microphone (with a ‘dead cat’ windscreen mounted in this photo). As with the a6100, the body is light and feels pretty plasticky in the hand.

And what’s that in the distance? Why, it’s the first fully articulating LCD on any Sony a6000-series camera.

If there’s one thing that hasn’t changed in Sony’s a6000-series lineup in recent years, it’s the sensor. The ZV-E10 uses the same 24MP CMOS sensor that’s found in numerous other Sony APS-C bodies and, generally speaking, that’s a good thing. It produces great-looking images and high quality 4K video. Unfortunately, it reads out very slowly, which results in a lot of rolling shutter when panning the camera in 4K video mode.

The ZV-E10 uses Sony’s latest autofocus system, which provides near-flawless tracking of subject’s eyes and faces, even when they turn away. That means no ‘hunting’ while vlogging, and a really impressive Product Showcase feature that will be covered later.

And now, onto the features that make the ZV-E10 unique; hint, it’s all about vlogging.

When the camera is pointed at you, a number of features become available. One is Background Defocus, which opens up the aperture to increase depth-of-field. It works, though in bright light, the faster shutter speeds required can lead to choppy, awkward-looking video.

Product Showcase is especially slick. When activated, the camera focuses on any object that appears in front of you. When you remove the object, it jumps right back to the subject. Sony’s AF system is quick enough to make the transitions almost instant.

Like many cameras, the ZV-E10 has a soft skin feature, which turns your face to something resembling wax to clear up any blemishes. When capturing video, a red outline appears on the LCD, and the AF-assist light plays the role of a tally lamp.

There are some important things about video capture on the ZV-E10 that potential buyers should know. First, the camera lacks in-body image stabilization and, unless your lens has it, you’ll have to use the electronic version. The electronic version has a hefty 1.44x crop which, when factoring in the existing APS-C crop, turns your 24-75mm equiv. kit lens into a 35-108mm. You’ll need a pretty long selfie stick (or an even wider lens) to compensate for that.

There’s a smaller crop when shooting 4K/30p footage: 1.2x. As long as you keep electronic IS turned off, the kit lens will start off at a reasonable 28mm. If you drop the frame rate to 24p, the crop disappears.

The quality of 4K video looks great, by the way, though rolling shutter is a problem when the camera is panned. (1080p video is far less impressive.) The E10 supports S-Log2/3 and HLG, for easier color grading in post-production.

The microphone at the center of the photo is made up of three capsules and captures audio from the front of the camera. It’s not as sophisticated as the subject-tracking mics on the Panasonic DC-G100/G110, but they’re still better than what’s on most cameras. A windscreen (aka ‘dead cat’) is included in the box.

If you want a a better mic, the hot shoe is right next door. Sony-branded mics can take advantage of the Multi Interface shoe for cable-free operation, while third-party mics will need to be connected to the adjacent mic socket.

The controls on the right are different than on your typical a6000-series camera. Most notably, the mode dial is gone and has been replaced with a button that switches the camera between stills, video, and slow & quick modes. There’s a larger-than-average video capture button, one of the camera’s two control dials, a zoom lever for power zoom lenses, and a button for activating the Background Defocus feature.

Under somewhat flimsy plastic doors you’ll find the camera’s various ports. From top-to-bottom, we have a 3.5mm mic input, USB 3.2 Gen1 Type-C port, micro HDMI output and a 3.5mm headphone socket. The camera can be charged and operated while connected to the USB port. It’s also the means by which you can use the camera for livestreaming (which includes use as a webcam).

While it’s hard to see here, the controls on the right side are largely the same as on the a6100. Sony continues to use the same poorly placed dial on the back panel, and you need to reposition your hand to switch from the dial to the one on the top.

Unfortunately, the ZV-E10 uses the same 921,000 dot LCD found on all of Sony’s current a6000-series models. Almost all compact mirrorless cameras are using 1.04 million-dot (or higher) displays these days. The display is touch-enabled and can be used for focusing and taking a photo, as well as zooming photos to 100% in playback.

As you can see, the ZV-E10 lacks an EVF, but that’s no surprise, since there’s just no room for one.

The ZV-E10 uses Sony’s familiar NP-FW50 lithium-ion battery, which is good for 440 shots (per CIPA rating), and likely a lot more, assuming that you go easy on the Wi-Fi. As mentioned earlier, the camera can be powered with a laptop charger or power brick, so you can shoot with no interruptions.

Next to the battery is the memory card slot, which supports both SD and Memory Stick Pro Duo media. The SD card slot accepts UHS-II media but cannot take advantage of its speeds.

The Sony ZV-E10 is one of only two interchangeable lens cameras specifically designed for vlogging, with the other being the Panasonic Lumix DC-G100/G110. It offers an impressive set of vlogging features, and its autofocus system never misses a beat (unlike the G100).

Its 4K video quality is highly detailed, though the crops when shooting 4K/30p footage or using the electronic image stabilizer are hefty, making a wider lens (or longer selfie stick) a requirement. Rolling shutter is very noticeable when panning, as well.

The ZV-E10 is a competent stills camera, but if that’s your focus, then you should consider the a6100 or a6400. Those models don’t have all the neat vlogging tricks, but they do have an electronic viewfinder and built-in flash.