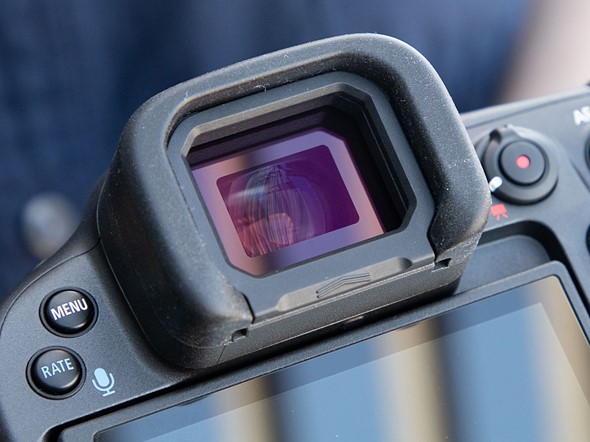 As expected, the Canon EOS R3 is chock-full of some of the latest and greatest camera technology that we’ve ever seen. Much of this is due to an all-new, super-fast sensor, redesigned processor and a machine learning-trained autofocus system that readily detects humans, animals and race cars.

As such, Canon is quick to point out that there is much more to the EOS R3 than just Eye Control AF – but Eye Control AF is a novel feature, despite debuting decades ago, and frankly, it’s something I thought was just going to be a gimmick. So of course, it was one of the first things I wanted to test out.

But first, let’s back up a bit. Professional photographers are famously stuck in their ways, often reticent to try new handling or usability features for fear of having to re-calibrate themselves, which would increase the potential for error. Missing a shot is lost money. So this reticence is understandable.

This reticence is also responsible for the, shall we say, layered approach to AF control that Canon has included in the EOS R3. If you want, you can still control the AF point using the front and rear control dials, just like you could with 2001’s EOS-1D. You can also use the AF joystick, which is still disabled by default. The touchscreen is another fine way to take control of the autofocus system, and is my preferred method on cameras that lack a joystick; I’m looking at you, EOS R.

Then, Canon introduced the ‘Smart Controller,’ a sort of touchpad for your thumb integrated right into the AF-ON button on the EOS-1D X Mark III and now the EOS R3. It’s a powerful tool, allowing you to drag your thumb to move the AF point around while still continuously focusing, even if you’re a back-button shooter.

If you’ve found these four methods somehow lacking for the way you work, with the R3 you now have a fifth in the form of Eye Control AF. And while I can’t say I’d use Eye Control for every type of photography – more on that later – it was, surprisingly, perfect for photographing soccer. Here’s why.

In my time at DPReview, one of the terms that has been all-but-beaten out of me is ‘intuitive,’ which at its most basic, is a synonym for ‘instinctive.’ You just know what to do without study or practice. A great example is early-generation iPhones (‘early’ is an important term in this case). Hand one of them to a kindergartener or your grandmother, and odds are, they’ll find their way around just fine.

But it’s a term that I don’t use much anymore because, it turns out, very few things are truly intuitive. People who are familiar with Canon might make the mistake of thinking that the EOS R3’s menu system is intuitive, for example, but it’s really not – it just seems that way for them because they’ve learned their way around it after using it and studying it for years on other Canon cameras. Hand an EOS-1D X III to a kindergartener and ask them to format the memory card. I doubt it would go well. If it does, call us up and we’ll offer them an internship once they’re old enough.

Eye Control AF is, like an early iPhone, truly intuitive once you stop thinking (or overthinking) about it and get to work.

Somewhat paradoxically, shooting a challenging sporting scenario turned out to be the perfect use case for testing out this feature I’ve never used before. We were shooting soccer practice, which was appropriate as we all needed a bit of practice to get back into the swing of things after 18 months of not shooting sports thanks to Covid.

With Eye Control AF, I didn’t have to think about where to place the AF point, or make sure I kept my central point over the action to initiate tracking. I could just watch where the action was happening in the frame, maintaining my preferred composition, and hit the shutter. The AF area would go to where I was looking, focus, initiate tracking on the player (often recognizing and following their eyeball), and I could fire off as many shots as I wanted.

What’s more, the addition of easily-defined custom zones on the EOS R3 works in tandem with Eye Control AF in a really cool way. I spent a lot of time shooting with a 400mm F2.8 lens, so I had a good idea of the size of the subjects at certain distances within the frame.

I defined a custom area that was roughly the height and width of a player, with a bit of ground under them so I could see the ball. I could then keep my eye on the ball, but the zone when I initiated focus would be over the player controlling the ball. The camera would identify the main subject as human, and start tracking their face or eye, all in an instant.

While Eye Control AF worked really well for me in a fairly challenging situation, Canon is quick to point out that there are some qualifiers to be aware of.

To state the obvious, there are lots of people on this planet and they have lots of different eyeballs. Some people (those with very pale blue eyes, certain eye conditions or who wear glasses) may experience inconsistent performance.

In my case, shooting outdoor soccer, I calibrated facing the sun, and then facing away. I calibrated in the shade with a wall behind me, and again with a blue sky behind me. I also did all of this in portrait orientation as well as landscape. Each calibration will increase the system’s accuracy in tracking where you’re looking, and I had no issues with the system during the soccer practice.

Finally, Eye Control AF isn’t for everything. If I’m shooting a carefully framed landscape or architectural scene through the viewfinder, my eye is darting all over the place, often looking at extreme edges or corners to keep the composition just as I want it. Eye Control AF is obviously unnecessary here, and would end up being just plain distracting.

Thankfully, if you find yourself in a situation where Eye Control is not needed, or worse yet if it begins to misbehave (I had to stop and do a couple of calibrations mid-day), you can disable the feature with a simple button press and the R3 will default to the ‘Set’ button smack dab in the middle of the rear control wheel.

Canon is correct: the EOS R3 is not just about Eye Control AF, and there will certainly be users who never even enable the system. But for those of us at DPReview that tried it, we loved it. It’s such a simple yet powerful way of working for a wide variety of photography that we’re anxiously awaiting the technology to trickle down to more consumer-level products. It’s honestly one of those features that would benefit everyone from beginner photographers that just want to document their families, all the way up to pro sports shooters.

After this experience, I would frankly prefer not to use an AF joystick ever again. Even using a touchscreen just feels clunky after being able to take control over such a significant aspect of the camera simply by moving my eye. So while we’re not sure that Eye Control AF is the single ‘killer feature’ that will sway people into buying an EOS R3, it is absolutely revelatory for some types of photography and in use, very quickly becomes second nature.