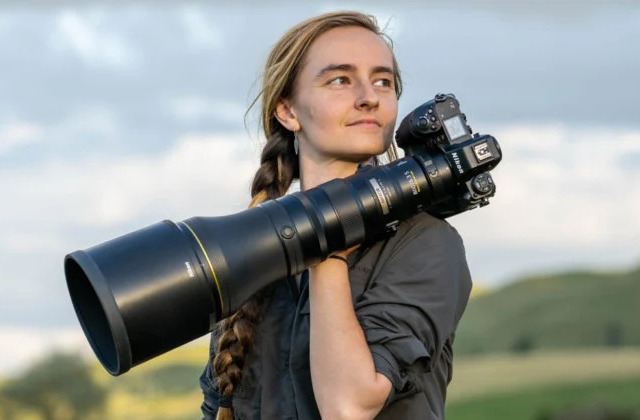 Nikon has announced the Nikkor 800mm f/6.3 VR S super-telephoto lens for its Z-mount cameras. While still a hefty lens, it is 48% lighter and 16% shorter than its F-mount counterpart thanks in part to the use of a Phase Fresnel (PF) front element.

The 800mm f/6.3 VR S benefits from what Nikon says are the latest optical technologies that result in maximum sharpness and fidelity while at the same time being smaller and lighter which the company says makes it comfortable to shoot either handheld or on a tripod or monopod.

An Emphasis on Comfort and Performance

Nikon says that the 800mm f/6.3 lens was built with an emphasis on comfortable usability and optical performance. It is constructed of 22 elements in 14 groups, and Nikon explains that the aforementioned PF element is optimally positioned to minimize ghosting and works in tandem with a nano-crystal coating, three Extra-Low Dispersion (ED) elements and one Short-wavelength Refractive (SR) element to effectively suppress axial chromatic aberration.

Nikon claims that the lens is able to capture the sharp contrast and detail of subjects with extreme precision. The front element is equipped with Nikon’s nonstick Fluorine Coat, which repels oil, moisture, and smudges and which Nikon says easily wipes clean.

Just as important to Nikon was the comfortable usability of the lens, which the company says was carefully balanced. The center of gravity of the lens is closer to the photographer’s body, which Nikon says enhances the ability to pan smoothly while tracking fast-moving objects such as birds or planes.

The lens weighs 5.25 pounds (2,385 grams) with a reduced footprint of 5.6 inches by 15.2 inches compared to its F-mount predecessor. Nikon equipped the lens with rubber gaskets that keep dust, dirt, and moisture out of the moving parts of the lens, although thorough dust and drip resistance is not guaranteed in all situations or under all conditions.

The lens has an optical vibration reduction (VR) function that Nikon says provides superior compensation that is equivalent to shooting with a shutter speed of five stops faster. When paired with the Z9, Nikon says that the Synchro VR activation achieves an equivalent of 5.5 stops of compensation.

The lens has a Memory Recall function that can be assigned to a button which Nikon says instantly recalls focus positions that have been stored in advance. The company says this feature can be used to make it fast and easy to acquire a subject that is going to appear in an anticipated location.

The lens features four L-FN2 buttons and one L-Fn to which a variety of controls can be assigned from the menu, including subject tracking, AF lock, and playback. The control ring can also be assigned to adjust ISO, aperture, and exposure compensation.

Below are a few sample images taken with the new lens, all of which can be clicked to reveal higher resolutions.