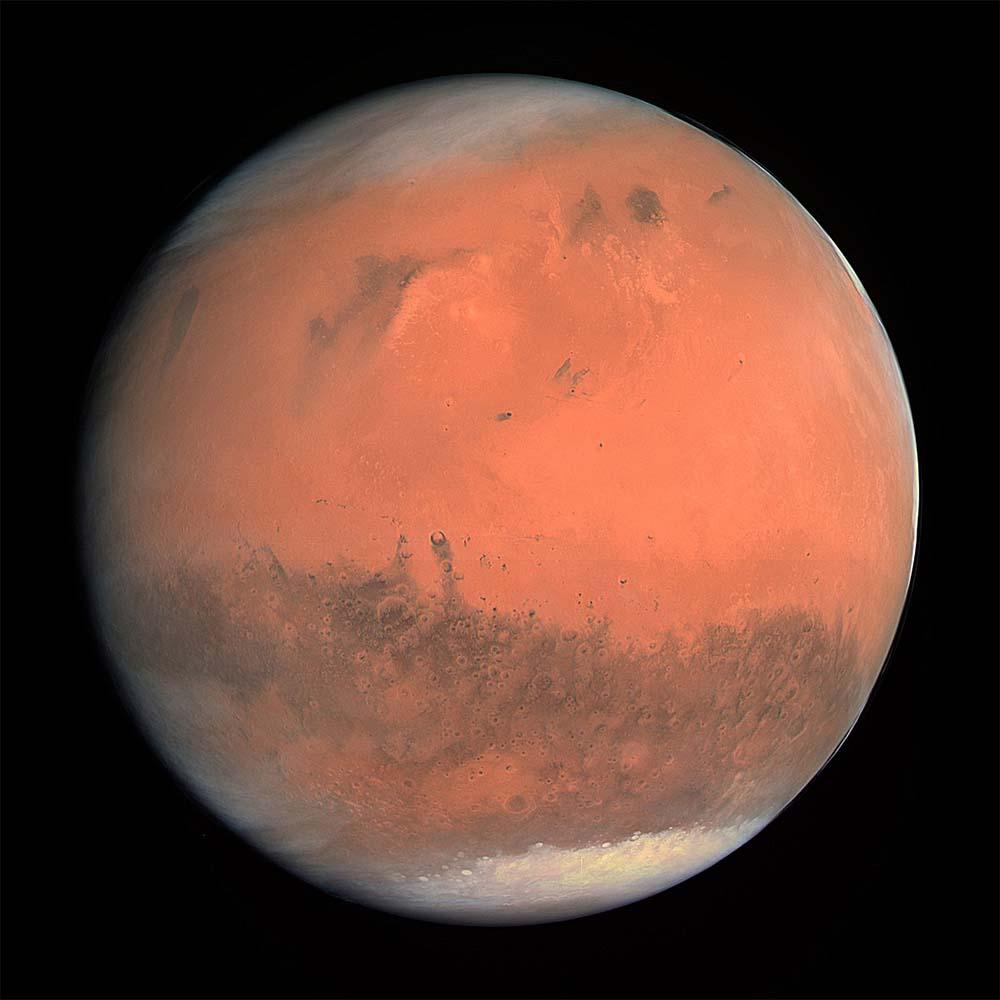 Beyond Earth’s orbit lies the fourth planet from the Sun is Mars. It’s a small, mysterious planet that fascinated humanity for millennia. It has the appearance of a fiery reddish ball in the night sky, seemingly always ready for battle, befitting its name as the Roman god of war.

Unlike other planets, you can view Mars surface in detail through a telescope. Its captures the imagination of astronomers for centuries. For amateur astronomers, observing Mars can be as exciting as the rovers collecting data on it.

This guide will help you understand Mars and what you need to look out for if you are interested.

Earth and Mars travel around the Sun in oval-shaped or elliptical orbits, and neither rotation is a perfect circle. They are resulting in the distance between the two planets varying wildly. Mars opposition occurs when the Earth catches up to Mars in their respective orbits and between the Sun and Mars.

Meaning that Mars rises in the east as the Sun sets in the west and remains visible all night long. Mars Opposition occurs about every 26 months.

Tip 2: Use an astronomy app or star chart

How do you find Mars? If you’re an experienced astronomer, then you’ve probably been following Mars opposition. But for the rest of us, using star charts in astronomy magazines or website are helpful guides to spot Mars. Using an astronomy app such as Celestron’s Sky Portal mobile app is a good idea for a more modern tool.

Telescopes: Any small telescope with an aperture of 60mm to 90mm will be able to reveal some surface marking on Mars. Although the image scale will be short, and the resolution will be somewhat limited. If you want more resolution, consider using a larger telescope to observe prominent features.

Filters: The use of colour filters is a great way to enhance the Martian surface’s subtle features for a more enjoyable experience. Filters can be individually threaded onto the end of eyepiece barrels or be stacked together to enjoy the benefits.

Cameras and Phone adapters: Using your smartphone’s built-in cameras are getting better. You can hold your phone up directly to the telescope’s eyepiece to take advantage of its image scale. It would be better to use a cell phone adapter for your telescope for clear pictures.

Getting a DSLR camera adapter will help in capturing space as you’ve never seen before.

Tip 4: What to look for while observing Mars

Mars goes through many changes and give observers something to observe. For an amateur astronomer, here are a few details for you.

Phases: While Mars doesn’t exhibit a full range of degrees as seen from Earth. It does appear almost in a gibbous phase, leading up to a complete stage at opposition.

Polar Ice Caps: Mars has ice caps at its poles that grow or wane with the season. They are thinner and smaller than Earth’s ice caps and made from frozen carbon dioxide and water ice, which lies beneath.

Land Formation: Unusual dark surface formations on the Martian surface are named after seas or lakes. These Maria appeared to change shape over time and be seen covered in dust and sand. Look for large ancient volcanic “seas” such as Sytris Major, Mare Tyrrhenum, and Mare Cimmerium.

While Valles Marineris, one of the largest canyons in the solar system, can be seen through a telescope as a dark scar across the planet’s surface.

Dust storms: Dust storms on the planet are unpredictable, but they occur about twice every decade. Once in 2018, a dust storm engulfed the entire world and limited the ground’s surface views.

Mars visibility: Although Mars doesn’t reach opposition in 2021, it will still be visible for most of the year before eventually becoming like an inconspicuous second magnitude star before being lost in the Sun’s glare around late August. It will then reappear low in the east-south eastern morning sky from about November 24 and be visible through the calendar year’s end into 2022.

Steady seeing conditions are critical when observing Mars: Avoid nights of bad seeing when the atmosphere is turbulent when Mars appears like a boiling reddish blob in the telescope. Start with a low magnification and work your way up if the views remain steady.

Cool your telescope down: Make sure to cool down your telescope by bringing it out about an hour or so before you plan to observe to cool it to ambient temperature. The telescope needs to reach thermal equilibrium with the outside air temperature to avoid distorted views. Telescopes that have large mirrors and lenses will take longer to cool down for the best ideas properly.

Observe often: Mars rotates on its axis once every 24 hours and 37 minutes-slightly longer than one day on Earth. Meaning that if you observe the planet simultaneously for several weeks, you will observe different surface areas. Extend your observing times accordingly, especially during the months leading to and after opposition.

We hope that this guide has helped you in becoming better acquainted with Mars. So that the next time that you go out observing, to take this guide into account.

This website uses cookies to improve your experience while you navigate through the website. Out of these, the cookies that are categorized as necessary are stored on your browser as they are essential for the working of basic functionalities of the website. We also use third-party cookies that help us analyze and understand how you use this website. These cookies will be stored in your browser only with your consent. You also have the option to opt-out of these cookies. But opting out of some of these cookies may affect your browsing experience.
Necessary Always Enabled

Performance cookies are used to understand and analyze the key performance indexes of the website which helps in delivering a better user experience for the visitors.

Analytical cookies are used to understand how visitors interact with the website. These cookies help provide information on metrics the number of visitors, bounce rate, traffic source, etc.

Advertisement cookies are used to provide visitors with relevant ads and marketing campaigns. These cookies track visitors across websites and collect information to provide customized ads.

Other uncategorized cookies are those that are being analyzed and have not been classified into a category as yet.