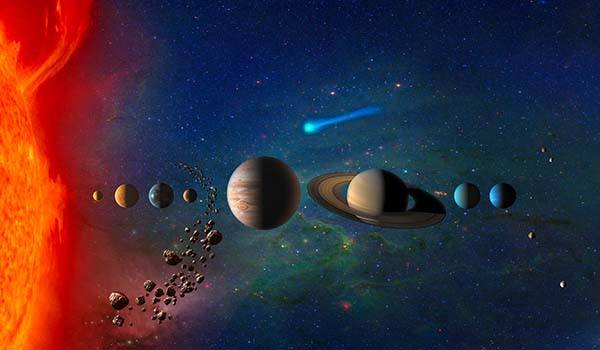 Beyond Saturn’s orbit in the cold and dark depths of the outer Solar System lie the giant planets Uranus and Neptune, a dwarf and the former ninth planet in the Solar System, Pluto.

This guide will show you how to observe these distant worlds and the ways to watch them.

Uranus is the seventh planet from the Sun and the third-largest planet in our Solar System. Uranus was the first planet discovered through a telescope.

Because Uranus is relatively bright, using a telescope with at least four inches of aperture or more at about 150x magnification should be enough to reveal its very tiny aqua-blue disc in calm skies. If you do have an 8″ aperture telescope, you might be able to see two of its brighter moons.

Neptune is a dark, cold, and an extremely windy world that is very similar to Uranus. It’s known as the second blue planet after Earth, the eighth planet from the Sun, and the fourth-largest planet in our Solar System.

Neptune’s mantle is composed of water, methane, and ammonia fluids above a small ice and rock core. Its atmosphere is made up of hydrogen and helium, but it also contains methane, which gives Neptune its bluish appearance. Uranus classifies as an ice giant, not a gas giant.

Neptune spends all of 2021 in the constellation Aquarius and will have a peak magnitude of +7.8. It has a tiny bluish dot best seen in a telescope using high magnification. You’ll need a telescope of at least eight inches of an aperture to catch Neptune at about 100x to 150x magnification.

It can be visible in the morning and evening skies during these periods:

Growing up, many of us learnt that Pluto was the ninth and furthest planet from the Sun. In 2006 Pluto was demoted from a planet to a dwarf planet, which remains controversial among Pluto fans.

The Dwarf planet Pluto will be residing in Sagittarius in 2021 with a visual magnitude of +14.4. Observing Pluto is the ultimate challenge for astronomers. It’s smaller than Earth’s moon and is approximately 3.3 billion miles away from us. To properly view Pluto, you’ll need a large aperture telescope of at least eleven inches. Make sure to observe it on really dark skies.

If you have a computerized telescope, it will quickly locate the planet but will only look like a faint star and is indistinguishable from any other nearby faint star.

It will be visible in the morning and evening skies during these periods:

While these planets aren’t as popular as other planets, they are significant challenges to find in the night sky for both amateur and veteran astronomers.