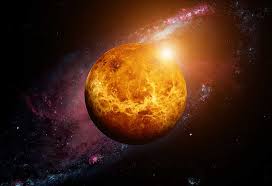 We’ve all seen our neighbouring planet Venus in the sky, at one time or another. Our history has had various names over the years, such as an evening star, UFO, and the Star of Bethlehem. It’s had many astronomers captivated with its allure and being our neighbour.

Often referred to as Earth’s twin, Venus resembles our planet in size and mass, but those are the only similarities between them. Venus is a bleak world, covered in thick reflective could that conceal its surface. The surface-reaching temperatures of nearly 900 degrees Fahrenheit make it one of the Solar System’s hottest planets. Due to its dense clouds reflecting sunlight into space. Ranking as the third brightest object seen from Earth after the Sun and Moon.

So how do you know when to look for Venus in the evening or morning? We made a few tips to help you get better acquainted with our planetary twin.

To observe Venus is very easy, but you should take care to watch it safely. Venus mainly orbits around the Sun. During its inferior and superior conjunctions, Venus will be in proximity of the Sun from our line of sight and lost in the Sun’s glare. Never attempt to view Venus during these conjunctions with your naked eyes, through binocular, naked eyes or a telescope.

The best views for Venus are after the Sun sets or before it rises. If you’re an eagle-eyed observer, you may be able to pick out Venus in broad daylight.

Morning: Best seen from January 1 to January 23. It will be visible low near the east-south-eastern horizon before dawn.

Evening: Visible from May 24 to December 31. It returns to the evening sky and will be visible at dusk near the western horizon.

The most useful information for finding Venus on any given night is to use star charts or an astronomy app. You can make use of astronomy apps such as Celestron’s SkyPortal mobile app.

If you want to view Venus’s beauty, you can use your eyes, even in city light pollution, but a binocular or telescope will enhance your view. Use a telescope of at least 60mm aperture or greater with at least 50x magnification to observe the planet. To reduce the amount of glare, add a moon filter or other coloured filters will work.

Venus goes through phases, just like the Moon as it orbits around the Sun. Its phases are easily visible through a telescope with moderate magnifications as it waxes or wanes. Venus is brighter and larger during its crescent phases than the near-full phase due to its position closer to Earth.

Other than its phases, Venus doesn’t have much to reveal on its surface as thick clouds of sulphur dioxide permanently cover it.

This guide has helped you become better acquainted with the planet Venus. It’s easy to find and makes an excellent target for beginner and veteran astronomers.

Find the perfect telescope for you at Cameraland Sandton